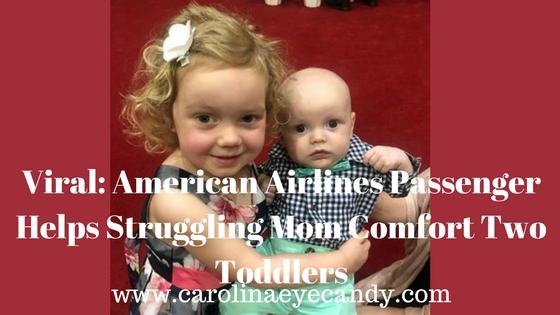 Bringing little kids on flights can be quite a bit of a quandary, and parents know this all too well. However, unexpected instances can occur during this dreaded occasion.

Jessica Rudeen was flying with her three-year-old daughter Caroline and her four-month-old son Alexander from Missouri to North Carolina to visit their grandmother, her mom. The kids were beginning to scream and kick and yell. Caroline, who was initially excited to fly, let on, yelling, “I want to get off the plane! I don’t want to go!”

It was gradually rising to a complete embarrassment when a fellow passenger, 52-year-old Todd Walker, helped appease the kids, especially Caroline. Seated next to the family, Walker assured Caroline that it was all going to be fine, recalling a scene when he and his wife experienced a similar situation with his sons in a plane.

According to Jessica Rudeen, Walker was holding Alexander in his arms as she got Caroline settled in her seat, and spent the flight entertaining Caroline with coloring, watching a movie, and showing sights outside of the window.

Rudeen said that Walker and Caroline were basically best friends by the end of the flight.

Rudeen shares how God’s grace has shown through Walker’s kindness. The family plans to meet again this May.

Watch the video below: