Overcoming Bullying And Embracing Your Uniqueness 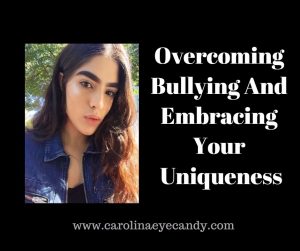 Fact- bullying is one of the major reasons teens commit suicide. Bullying is so prevalent that people are doing drastic measures in overcoming bullying, especially in schools. So why does bullying happen?

Bullying happens when someone does not conform to what society dictates as normal. The bullied may look different from regular people. She/he may dress differently than his/her peers, may belong to a different race or social class, believes in a different religion and so on. Bullying can happen to all.

This happens to even models and celebrities. Puerto Rican born model Natalia Castellar is known for her brows but when she was younger, her most prominent feature was the reason she got bullied. The bullying was so bad it caused her a lot of self-esteem issues growing up. Her sister, who’s a photographer, started posting her photos on social media which led Next Models Agency to sign her up as a model.

What was her biggest peeve growing up, has become her advantage. In an interview with W Magazine, she said “Now I don’t care if they stay trendy or not, I love my eyebrows. They set me aside from other models. They’re my trademark, and I wish I would have embraced them sooner.”

She encourages women to embrace their uniqueness. “We need to realize that just because someone’s beauty is different than our own doesn’t mean we’re not beautiful. We need to embrace our diversity and celebrate what makes us, us!”

Make your brows stand out by having them done in one Carolina Eye Candy’s three locations!

Original article can be found here.