Of Assumptions, Biases and Discrimination 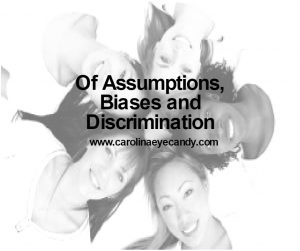 \
Just a few days ago, the internet was in an uproar when a footage of a BBC interview was interrupted when the guest’s kids gatecrashed the live session. The situation became hilariously bad when a woman desperately tried to get the kids out of the room.

Memes and comments flooded Twitter soon after with many people mistakenly assuming that the Asian woman was the nanny when it fact, it was the kids’ mom and the guest’s wife. Question soon began circulating the net, why people automatically assume that the woman was the hired help and not the lady of the house.

The answer to that is so simple. Because we have biases and are entirely discriminating. Some people have this misplaced superiority complex over someone they considered beneath them. I am not just talking about white lording over black or any other color. Discrimination is not entirely limited to race. People discriminate when the other person has a different point of view or perspective from them. Discrimination also comes from having a different religion or even political conviction.

Good thing though perceptions can change as we grow older. But how do we teach our kids not be as bad as we are? We need to educate our kids that they should respect everybody regardless of race, gender, socio-economic status and political view. That they can celebrate their own individuality yet respect other people as well. It doesn’t matter if they’re wearing designer clothes while their friends got their jeans from the Goodwill store. We were all made equal in the eyes of our creator.

Having respect for each other will help you get on with your journey in life.