What We Could Learn From Beauty And The Beast 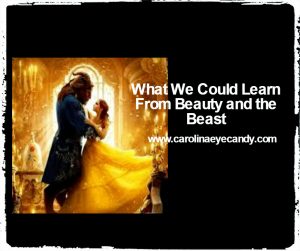 Tale as old as time…. who did not grow up watching Beauty and the Beast?Disney made a remake of a well loved classic more than twenty five years after the animated movie.  ICYMI, it grossed $392M nationawide (and still counting) against a $160M production budget. Most reviews were positive albeit, there were a few disgruntled assessment usually in the choice of the “human” beast and its fidelity to the original story.

It’s a win-win movie because it follows the fail proof recipe, that  true love wins.

Here are some of the things that we could learn from Beauty and the Beast:

Beauty is only skin deep

The Beast became a beast because of a curse put on him and the people surrounding him. He was an arrogant handsome prince who turned away a beggar who happened to be an enchantress. Gaston was a dashing eye candy who could not accept his loss. And Belle? Well, Belle was beautiful inside and out. The lesson here is that there’s physical beauty which people can immediately admire but what matters most is the purity of the heart.

It’s okay to be different

Belle was different from all the people in her village. She longed for more than what her provincial life can offer her. Because she believed in educating herself, she spent her time on books which made her see that there’s life beyond her quaint little town. A lot of people put her down but instead of letting that get the better of her, it made her want to explore possibilities outside.  For Belle, settling down and being contented like the rest of the female population was not for her.

No sacrifice is too great for the one you love

By a series of unfortunate events, her absent minded father found himself a prisoner of the beast. Belle, sacrificed herself for the love of her father. If that part of the movie did not make you weepy, I don’t know what could. Similarly she took the same daring risk when she went back to the castle to rescue Beast from Gaston and the villagers.

People find it very easy to believe rumors and hearsay

Call it gullibility. Call it stupidity at its finest but the villagers find it very easy to believe what Gaston has to say. This is sadly a reality up to these days. People believe everything they read or hear without verifying facts,

You can be an arrogant b*tch before but circumstances will make you change. Hopefully, like in the case of the beast, for the better.