Eyelash and Its Remarkable History 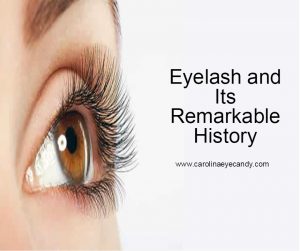 Men and women of ancient Egypt in 3500 BCapplied green- and black-toned ointments on their lashes and lids for functionality and style. Ancient Romans in 753-625 BC mixed kohl, and antimony or saffron, and burnt cork to thicken and darken lashes. European women in 476-1450 in the Middle Ages removed their brows and lashes to elongate their forehead.

Women in 1533-1603 dyed their brows and lashes in tones of red to imitate Queen Elizabeth’s reddish-gold hair. Eugene Rimmel, a London perfumer, introduced in 1840 the first nontoxic, commercial mascara.

The evolution of eyelash over the years

In 1916, false lashes were made for actress Seena Owen using human hair woven through fine gauze. In 1920, Maybelline mascara was trademarked by Tom Lyle Williams. In 1921, “Artificial Eyelashes and Methods of Making Same” was filed for US patent by Charles Nessler.

In 1923, the said patent was released, and the first eyelash curler was invented by William Beldue. In 1938, waterproof mascara was patented by Helene Vierhaler.

Roll-on Mascara was introduced by Revlon in 1958, and various colors were launched in 1961. Twiggy Lashes were revealed by Yardley in 1967. Great Lash Mascara was launched by Maybelline, and Ardell Lashes was founded by Arnold and Sydell Miller in 1971.

MEI-CHA was established by Lin McKinstry in 1984, and its extension 3D-Beauty was founded after later on. No Color Mascara was launched by Max Factor in 1988.

In 2001, the red fox fur lashes were worn by JLo quickly launched Shu Uemura’s Tokyo Lash Bar. In 2004, the US was introduced to eyelash extensions.Xtreme Lashes and NovaLash were among the first to offer eyelash extension products and training.

In 2008, FDA approved Latisse for treatment for inadequate lashes. In 2006, RevitaLash manufacturer Athena Cosmetics was founded. In 2014, the premier issue of Eye Lash magazine was published.

We will probably see more styles evolve in the near future.